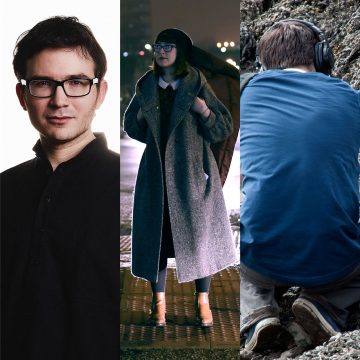 Timothy Cooper is a composer and performer of electroacoustic music. In his music he explores new contexts for the sounds he works with. He uses microphones as sonic microscopes and loudspeakers to amplify and heighten the qualities of the sounds he records.

Recent projects include the site-responsive installation Tide Times made with Laura Bissell and Breathing Space for tuba and electronics composed for Danielle Price.

Tim is a PhD candidate at the Royal Conservatoire of Scotland supervised by Professor Alistair MacDonald and Dr Diana Salazar.

He lectures at the Royal Conservatoire of Scotland and at Edinburgh College.

Supported by the Countess of Munster Trust, Danielle studied at the Royal Conservatoire of Scotland (formerly RSAMD) and graduated with distinction from the Master of Music Course in 2013.

In 2009, Danielle enrolled at the Hochschule fur Musik Franz Liszt Weimar as an ERASMUS student, where she studied with Walter Hilgers and Sebastian Wagemann. During her time at the RCS, Danielle was highly commended at the final of the RCS David James Brass Prize, awarded the RCS Governor’s Recital Prize for Brass and was made a recipient of the Robert McCreath Memorial Prize.

Danielle appeared in Tectonics 2018 where she played in Mats Gustafsson’s PLUGS for mixed ensemble. She performed alongside Tom Poulson and Timothy Cooper at the celebrated new music series “The Night With…” programmed by Matthew Whiteside. There she premiered the new work for tuba and electronics Breathing Space by Timothy Cooper. In April 2018, she was a featured artist in Loch Shiel Festival where she performed as part of a tuba trio in a site-specific concert underneath Glenfinnan Viaduct. The trio played again as artists in Glasgow’s Counterflows Festival 2019.

Tom Poulson (trumpet) has performed across Europe, Asia, Africa and North America. He is a member of Stockholm Chamber Brass, WorldBrass and KammarensembleN and a prize winner at various international competitions, including the Aeolus International Music Competition for Wind Instruments in Düsseldorf and Yamaha Music Foundation of Europe competition. As a concerto soloist he has appeared with the Royal Stockholm and Royal Flemish Philharmonic Orchestras, Düsseldorf and Nürnberger Symphonikers and was the soloist in a private concert for Princess Anne in Mauritius.
Tom is the Co-Principal Trumpet of the Västerås Sinfonietta and has appeared as guest principal trumpet with the Royal Stockholm Philharmonic Orchestra, Deutsche Kammerphilharmonie Bremen and the BBC Scottish Symphony Orchestra. He has been a member of the Lucerne Festival Academy, performing under the baton of Pierre Boulez, and worked as an onstage musician with the Royal Shakespeare Company.
“I couldn’t get the smile off my face during Oliver Searle’s trumpet Sequenza… Tom Poulson’s performance was staggering.”
Michael Tumelty – The Herald
http://tompoulson.com/