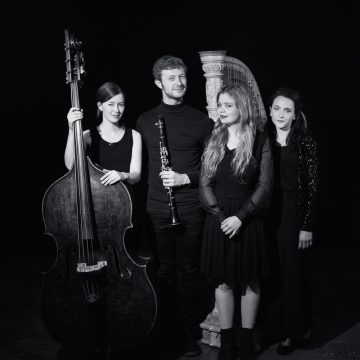 Hermes experiment première a new work from Matthew Grouse (commissioned by The Night With… ) along with the winner of the call for scores, Josephine Stephenson’s tanka, Robin Haigh’s Kalimotxo and Meredith Monk’s Double Fiesta

The Hermes Experiment are one of this year’s showcase artists the Classical Next Conference 2019. In January 2019, they celebrated their fifth birthday with a concert supported by Arts Council England and RVW Trust, and recorded for future broadcast on BBC Radio 3. The ensemble also strives to create a platform for cross-disciplinary collaboration. In June 2015, they created a ‘musical exhibition’ with photographer Thurstan Redding, and in September 2016 during an Aldeburgh Music Residency, they developed a new interpretation of Shakespeare’s The Winter’s Tale.

The ensemble is also dedicated to the value of contemporary music in education and community contexts. In 2014-15, they took part in Wigmore Hall Learning’s schemes, and they are ensemble in residence for the Young Music Makers of Dyfed 2018-19. In 2017-18, they worked with composition students from both The Royal Academy of Music and Trinity Laban. They are running similar projects in 2018-19 at both institutions.