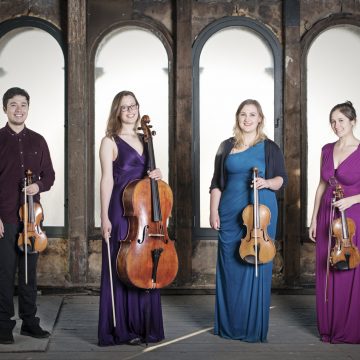 During their first year performing together, the Aurea Quartet were tfinalists in the 1st Sándor Végh International String Quartet Competition in Budapest where they were awarded a special prize for their outstanding performance of Lajtha String Quartet No.7. They were winners of the St Martin-in-the-Fields chamber music prize 2014, and after a series of successful auditions, were selected for the Enterprise Music Scotland Residency Project 2014-15, as St John’s Smith Square Young Artists 2014-15, and as resident quartet for the 2015 Wye Valley Chamber Festival. They have subsequently enjoyed playing regularly for audiences throughoutBritain and Europe. In 2015, the quartet was invited to perform in the Beethoven Plus series at King’s Place, at the Edinburgh Festival Fringe, the Cottier Chamber Project, and Absolute Classics’ International Musicians Platform Festival. The quartet has performed live on BBC Radio 3 (both In Tune and Proms Plus) and on BBC Radio Scotland’s Classics Unwrapped. A busy 2015 has also included exciting collaborations with Daniel Tong, Susan Tomes, Anna Hashimoto and Krysia Ostostowicz. The 2016/17 season is set to include more concerts throughout the UK, and further collaborations with Susan Tomes and Absolute Classics.

The quartet has enjoyed masterclasses with members of the Chilingirian, Dante, Elias, Endellion, Lindsay, London Haydn, and Maggini quartets. They are regular attendees of the London Chamber Studio classes in Kings Place.