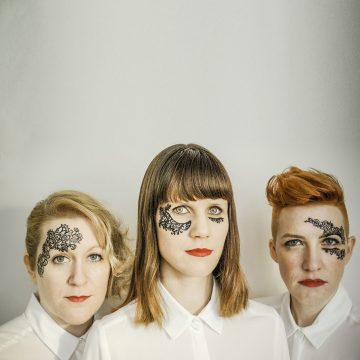 juice (‘The 21st century’s answer to the Swingles or the King’s Singers’ The Times) are at the forefront of the UK’s experimental/classical scene, performing new vocal music which draws on classical, world music, jazz, folk, pop, improvisation and theatre. They have featured on BBC Radio 4’s Woman’s Hour, BBC Radio 3 and Classic FM. They have performed at London’s Wigmore Hall and the South Bank, King’s Place and the Roundhouse. In 2011, they made their US debut with concerts in New York and at the famed SXSW Festival in Austin, Texas. In 2007, they were the first UK prize winners in the history of the internationally-renowned Tampere Vocal Festival. International performances include concerts in Denmark, Germany, France, Italy, Finland and the U.S.

juice‘s debut album ‘Songspin’ (Nonclassical, 2011) won an international Independent Music Award for Best Contemporary Classical Album in 2012. Featuring remixes by the likes of of Camille producer MaJiker and Bjork collaborator Mikhail Karikis, it was reviewed by The Observer as ‘Eighteen immaculately achieved tracks, spanning Elisabeth Lutyens to Gabriel Prokofiev via folk song and avant garde, enchant and enthrall’. Of their second album, ‘Laid Bare: Love Songs’ (Nonclassical, 2014) BBC Music Magazine said, ‘these three are feisty, and will take on anything the variety and virtuosity are astonishing, and rewarding’. Their third album, a collaboration with David Thomas Broughton entitled ‘Sliding the Same Way’ (Song by Toad, 2014) The Scottish Herald proclaimed it as ‘fascinating as it is unconventional’. Their fourth album, ‘Snow Queens’ is to be released Autumn 2018 on Resonus Classics and features arrangements of carols and new wintery commissions by composers such as Tarik O’Regan and Emily Hall.

juice regularly commission and premiere new works: recent projects have included performing Hannah Kendall’s new opera, ‘The Knife of Dawn’ at The Roundhouse; premiering a new work by Catherine Carter about the female welders of London’s bridges, under the river Thames in the Bascule Chambers of Tower Bridge; singing about the legalities of copyright in a Radio 4 programme hosted by poet Ian McMillan; performing in one of Radio 3’s experimental live broadcasts, ‘Open Ear’; and celebrating Shakespeare’s 400th anniversary by premiering new works with community choirs in Cambridge and Surrey directed by composer Stef Conner.

juice love experimenting with various art forms and cross-collaboration: they have had their music choreographed to by Maurice Causey from the Nederlands Dans Theatre; have devised their own live vocal score to the 1916 film The Danger Girl (BFI Southbank, Latitude Festival, King’s Place with the Bird’s Eye View Film Festival); have performed live for a London College of Fashion Graduate Show; have worked with internationally-renowned beatboxers Shlomo and Beardyman; have recorded vocals for a video installation by Turner Prize nominee James Richards; and performed in a forest with David Thomas Broughton at the End of the Road Festival.

juice are experienced and passionate music educators, bringing experimental a cappella vocal music (both performing and composing of) to groups of all ages and abilities around the country.  They have been Ensemble-in-Residence at the universities of York and Ulster and have run workshops and longer projects at numerous other academic institutions including Royal Holloway University, Cardiff University, RNCM, RWCMD, Leeds College of Music and Aberdeen University.  They have run youth projects for the likes of BBC Proms Inspire, Aldeburgh Young Musicians, the Wigmore Hall, Live Music Now, and Sound and Music.