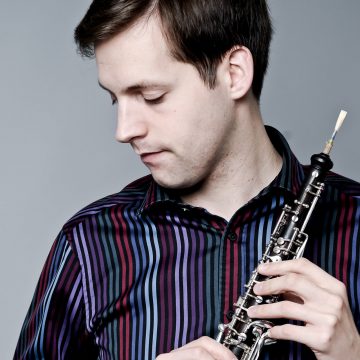 Described by The Independent as “a worthy champion” of contemporary oboe music, James has dedicated much of his performing life to promoting and extending the oboe repertoire. James has performed frequently throughout the UK and Europe including a solo recitals at the Wigmore Hall and live on BBC Radio 3. He has appeared as a soloist  in numerous UK festivals including Oxford, Leicester, Cambridge, Thaxted, Ryedale, Machynlleth, Swaledale and, King’s Lynn. James has released solo recordings for Champs Hill Records, Quartz Music and the ABRSM as well as featuring on a disc of Thea Musgrave’s works for Harmonia Mundi USA. Gramophone Magazine described his debut recital disc, Fierce Tears, as a “notable debut” and it was selected as the Editor’s Choice Recording by Classical Music Magazine.

James is deeply committed to expanding the oboe repertoire. He has worked closely with Michael Berkeley, John Casken, Jonathan Dove, John Woolrich, Thea Musgrave and Tansy Davies on their compositions for oboe. In 2015, James launched the New Oboe Music Project (NewOboeMusic.org) which promotes 21st century oboe repertoire across the world and the Leon Goossens Prize for Emerging Composers to help encourage a new generation of composers to write for the oboe. As part of this project James has curated a special collection of previously unpublished oboe repertoire in partnership with Composers Edition. James also has a keen interest in researching lost repertoire and bringing to new audiences works which have been rarely performed. In 2011 he worked closely with Christopher Hogwood on preparation for a new edition of Thomas Attwood Walmisley’s Sonatinas for oboe and piano.

James is an active chamber musician and is Artistic Director of Ensemble Perpetuo. Founded in 2013, Perpetuo is a chamber music collective that specialises in multi-art form collaborations and innovative ways of performing chamber music in new contexts. James has also performed with other chamber music ensembles including the Berkeley Ensemble and the Allegri String Quartet.

Aside from his performing interests, James is dedicated to broadening the appeal of the oboe and encouraging young people to learn the instrument. To this end, he has launched the website LearnToPlayTheOboe.com which now receives over a thousand new visitors every month from across the world. James also teaches at the Royal College of Music Junior Department and gives masterclasses across Europe. In recognition of his work in music education, James was awarded the inaugural Patricia Prindl Prize by the Musicians’ Company in 2016.

James plays a Lorée Oboe and Cor Anglais supplied by Crowthers of Canterbury. For more information about James and his playing, visit www.james-turnbull.com.