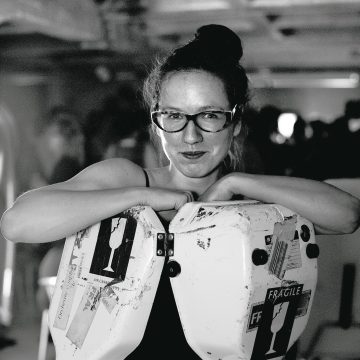 Émilie Girard-Charest is a cellist, a composer and an improviser. As a chamber musician, both as soloist and member of various ensembles, she has taken part in the premiere of more than sixty new works and has worked closely with many composers, most notably Malcolm Goldstein, Cecilia Arditto, Graciela Paraskevaídis, Enno Poppe and Jorge Diego Vazquez. Her own compositions have been performed by several ensembles, namely Quasar, Zukan, Continuum, Totem Contemporain, Novarumori and NO HAY BANDA. Émilie maintains an active international touring schedule and has appeared in performance at numerous festivals in Canada, Europe and South America.

Émilie holds degrees from the Conservatoire de Musique de Montréal and from the Hochschule für Musik und Theater Hamburg. She is now enrolled as a doctorate student at the Conservatoire National Supérieur Musique et Danse de Lyon and the Université Jean Monnet of Saint-Étienne (France), where she works on the development of an ergonomic writing of microtonality on the cello under the supervision of Philippe Hurel and Laurent Pottier.