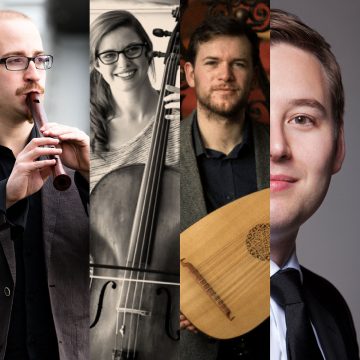 Formed in 2019, we began our collaboration working on a new work by Timothy Cooper composed for Rory McCleery (counter-tenor), László Rózsa (recorders), Lucia Cappelar (baroque cello) and Alex McCartney and electronics commissioned by Matthew Whiteside’s The Night With… As group we explore the contemporary performance of early music with a historical sensibility. We find new ways to frame and explore historical musical material through new compositions and improvisation that plays on and celebrates the playful, dextrous and emotive musical styles of the renaissance and the baroque.

The piece …shadows that in darkness dwell… is based on the Lachrymae Pavane by English renaissance composer John Dowland. Dowland used that melody in number of different works and in 1604 published his Lachrimae or Seaven Teares figured in seaven passionate pavans. It is from this connection that we take our name.

László Rózsa was born in Budapest in 1989, where he began his musical education. At the age of fifteen he entered the Universität für Musik und darstellende Kunst in Vienna, where he pursued preparatory studies with Helge M. Stiegler. He continued his studies with Peter Holtslag at the Hochschule für Musik und Theater, Hamburg and later on at the Royal Academy of Music in London, where he graduated with distinction in 2013.

As a soloist and chamber musician he enjoys a varied freelance career both in the UK and abroad, sharing the platform with distinguished musicians such as Michael Chance, John Butt, and Jan Waterfield, and performing with leading early music ensembles including the Dunedin Consort, Spiritato, and Oxford Baroque. László has performed numerous times on BBC Radio 3, and was recently selected into their Introducing Artist programme. He appears on albums published by Veterum Musica, Resonus Classics and Linn Records.

‘McCleery, a countertenor and academic as well as conductor, introduced the items with a lucidity combining boyish geniality with quite startling erudition.’ (The Sunday Times)

Rory McCleery began his musical career as a chorister at St Mary’s Episcopal Cathedral, Edinburgh. He gained a double first in music at Oxford University as both Organ and Domus Academic scholar of St Peter’s College, subsequently completing an MSt in Musicology with Distinction.

Rory is the founder and director of The Marian Consort, with whom he performs across the UK, Europe and North America. Under his direction, The Marian Consort has become renowned internationally for its compelling interpretations of a wide range of repertoire, particularly the music of the Renaissance and early Baroque, but also of works by contemporary British composers, and in 2017 was nominated for a Gramophone Award.

As a countertenor, Rory greatly enjoys performing as a soloist and consort singer in concert and recording with ensembles including The Dunedin Consort, Contrapunctus, The Monteverdi Choir, The Sixteen, The Gabrieli Consort, Le Concert d’Astrée, The Academy of Ancient Music, The Orchestra of the Age of Enlightenment and The Cardinall’s Musick. Recent solo performances have included Bach St John and St Matthew Passions; Handel Messiah, Dixit Dominus and Ode for the Birthday of Queen Anne; Pärt Passio; Purcell Come ye Sons of Art, Ode to St Cecilia and Welcome to All the Pleasures; Monteverdi Vespers of 1610; Rameau Grands Motets; and Britten Abraham and Isaac in venues across the UK and Europe. Rory has appeared as a soloist for broadcasts on ARTE, Radio France, BBC Radio 3 and German and Italian radio, and collaborates regularly with the Rose Consort of Viols.

Rory is much in demand as a guest conductor, workshop leader and programming consultant, and has led workshop sessions, study days and singing courses across the UK, Germany, Spain and the USA, working with choirs of all ages and sizes in repertoire from Tallis, Gesualdo, Purcell and Gabrieli to the music of James MacMillan and Howard Skempton. He is a passionate believer in the importance of music education and singing for young people.

Lucia Capellaro completed her undergraduate degree at Birmingham Conservatoire in 2009 with a 1st class BMus (Hons), and in 2011 went on to study for her Masters at the Royal Academy of Music, where she received a Distinction with the prestigious DipRAM Award, under cellist Jonathan Manson. Based in the UK, she performs with ensembles such as the Dunedin Consort, Concerto Copenhagen, English Touring Opera, Ex Cathedra and the Hanover Band.

Alongside historical performance Lucia has a keen interest in other genres and performs regularly with jazz, folk and contemporary groups. She has been involved in a number of cross-disciplinary productions including ‘Where late the Sweet Birds Sang’ directed by Martin Parr at the Rose Theatre, ‘Noh Time like the Present’ with Noh theatre master Akira Matsui at LSO St Luke’s, ‘Calcutta’ directed by Katie De La Matter, and ‘A Thousand Faces’ directed by Amina Khayyam. Lucia is currently working closely with contemporary artists including DJ Yoda, Joel Culpepper, and Swindle.

Lutenist Alex McCartney has a busy performing schedule which takes him to concert halls across the world.

In 2015 he released his debut solo album Mèsangeau’s Experiments to critical acclaim: ‘McCartney’s interpretation of this reflective music is stylish and sublime.’ LSA. His second album Elizabeth’s Lutes was similarly well received: ‘Alex McCartney’s playing is sensitive and musical, and the recording picks up the sound of the lute very well.’ Early Music Review.  Toccata:Touched; theorbo music by Kapsberger was released January 2017: ‘With the rich, deep tones of the theorbo, and some rippling and cascading runs, deftly articulated here by McCartney, this is a delightful programme.’ Classical Notes. Alex’s latest recording Weiss in Nostalgia was released in 2018: ‘He plays it as if he’d never done anything else or had never considered any other music.’ Guitarre & Laute

Alex is also a BBC Introducing artist and performs on BBC Radio 3.

Libro Primo have recently released their debut album, Fantasia Incantata, of works in the ‘Stylus Phantasticus’; which received rave reviews from The New Yorker and Early Music Reviews+.

As a continuo player Alex’s playing has been described as ‘sinewy and sensuous, ornaments rarely exaggerated’ Observer: he holds principal positions in La Nuova Musica and Poeticall Musicke and performs regularly with most of the UK-based Baroque orchestras and a few further afield.

Alex is a life member of The Royal Society of Musicians.

Alex teaches the lute at the University of Aberdeen and at home in Glasgow. He has also created an Online Lute Tutor to encourage the proliferation of lute playing and enthusiasm.

In his spare time he enjoys making lutes and managing the Veterum Musica micro record label.