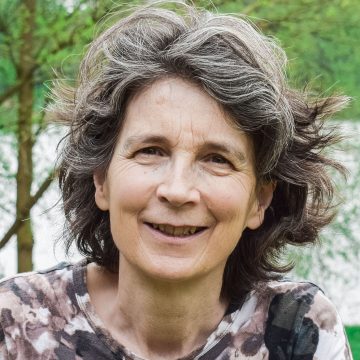 Sheena Phillips (b. 1958) is a composer and arranger, chiefly of choral and chamber music, now based in her native London after living and working for 15 years in the USA.  She is also an experienced choir director and teacher, currently directing Belsize Community Choir and the Michael Singers at University College London.

Some of Sheena’s chief inspirations are traditional music, poetry and the natural world. She has written settings or arrangements of devotional songs from South West India, ancient Japanese poems, medieval English poetry, Native American song-poems and folk songs from many parts of the British Isles and elsewhere in Europe.  Her recent music includes aleatoric depictions of rivers and the sound of wind in trees, three pieces for strings about the motion of animals – and a noisy open score orchestral piece depicting the Brexit referendum!

Sheena studied mathematics at Cambridge University and worked for several years in campaigning organisations (including CND and Friends of the Earth) before starting a career in music.  She founded Rudsambee Company of Singers in Edinburgh – now in its 25th year – and directed community, church and college choirs in Columbus, Ohio.

Over 30 of Sheena’s choral pieces are published by Boosey & Hawkes, Earthsongs, Lorenz, Novello, Santa Barbara Music Press and the National Youth Choir of Scotland. Various other pieces are available through CoMA (Contemporary Music for All) and Canasg Music (of which she is editor).